Fablevision was in Athens, Greece, 13th – 15th December, 2022, for the third transnational meeting of the Bridging Digital Erasmus+ project hosted by the Hellenic Adult Education Association and including Sweden’s Intercult and Poland’s  Instytut Kultury Miejskiej.

The purpose of the meeting was to discuss the various project undertaken by the partners and the creation of a “book of ingredients” on the methods employed.

For more information on the various projects undertaken by the partners, see the Bridging Digital e-book. 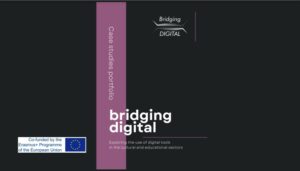 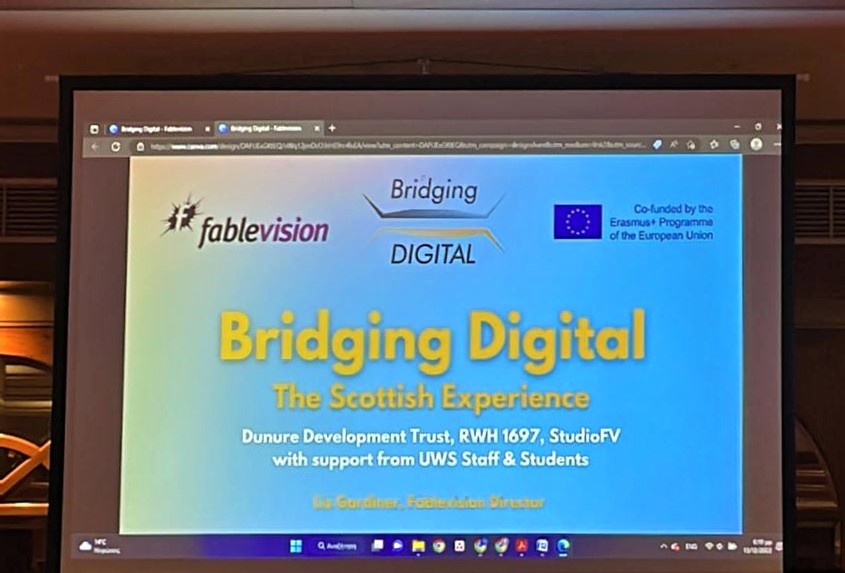 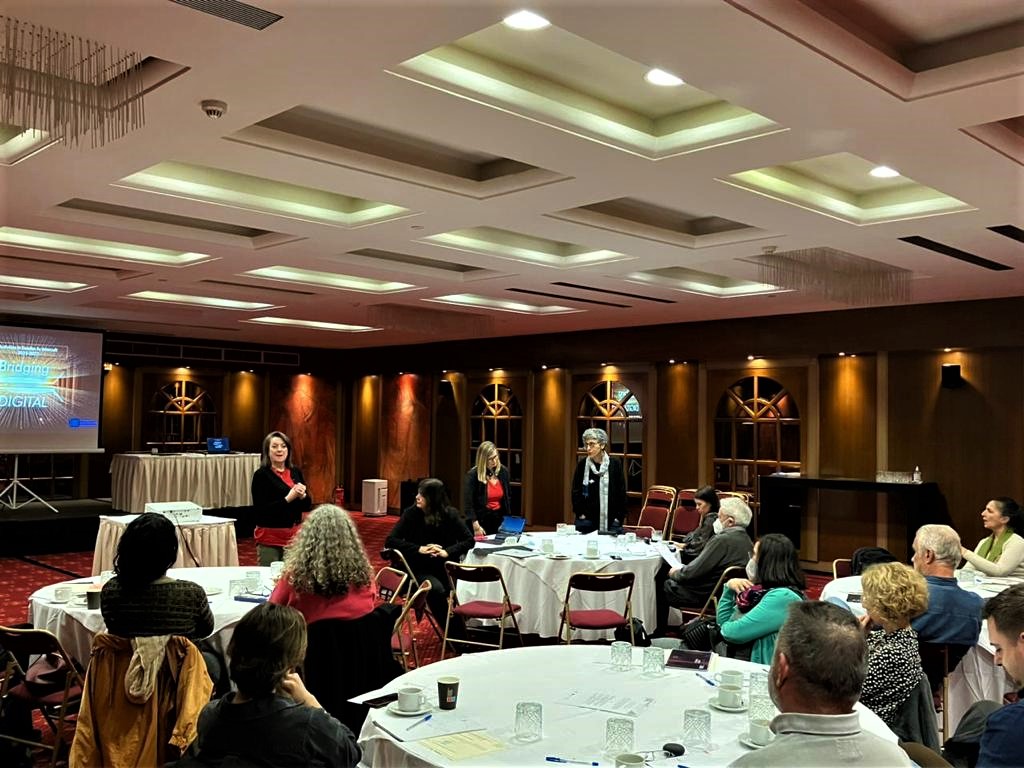 In 1696, following the discovery of the dismembered body of grandpa John Shaw near his home in Bargarran, Renfrewshire, suspicion that witches were abroad was growing.  When John Shaw’s daughter, Christian, began fitting, levitating and coughing up hot coals, pins and straw, the story developed a wholly different and destructive momentum.  An altercation with the Gaelic-speaking maid over milk had led to the uttering of a ‘curse’… and so the horror began…

In 1697, following the strange events at Bargarran, the accusations of witchcraft and the naming of almost 30 people by 11-year-old Christian Shaw, the accused were held in Paisley’s Jail awaiting trial.  Almost 30 people were imprisoned – 7 of whom were found guilty and sentenced to death at the Gallows Green, although one hanged himself whilst awaiting trial.  The fate of the others is largely unknown but as accused prisoners had to pay to get out of jail (recompense for ‘board and lodgings’) it is highly likely they languished there until they died.  There were tales of cries and moans coming from the jail for many years after 1697.

On June 9th, 1697, 7 innocent souls awaiting execution at the Gallows Green were subjected to a sermon at Paisley Abbey by an acknowledged expert, Reverend Blackwell, whose witch-finding experience was acquired several years before during the Salem witch trials in Massachusetts, USA.  The condemned were invited to confess their sins to save their souls from purgatory but in spite of enduring hours of corrective instruction, none changed their plea.

On June 10th 1697, Agnes Naismith, Catherine Campbell, John Lindsey, James Lindsay, John Reid, Margaret Lang and Margaret Fulton were taken from the prison by horse-drawn cart to be executed on the Gallows Green.  Their bodies were burned and the ashes buried under a horseshoe at Maxwellton Cross to prevent their spirts from escaping.  Thus grew the powerful myth that if that horseshoe were lifted, Paisley’s fortunes would decline.  Events in the 1960s and 1970s seemed to bear this out.  Whether true or not, Paisley Buddies take no chances and the Sandy Stoddart-commissioned tondo with the inscription, “Pain Inflicted, Suffering Endured, Injustice Done,” remains to this day.

The power of the Christian Shaw story did not end in June 1697.  Christian and her mother (having buried two husbands) embarked on a tour of Europe.  When the two returned to Renfrewshire they did so with a smuggled Jacquard loom which produced fine, high quality thread.  The establishment of the first thread mill at Bargarran followed shortly afterwards.

From this dark period of Renfrewshire’s history, the industrial heritage which brought wealth to Paisley through thread manufacturing was born.  At its height, 98% of thread in the world was manufactured by J & P Coats or Clarks of Paisley, Renfrewshire.  Coincidently but portentously, when the horseshoe was lifted in the 1960s, the mills went into decline and closed.

Fablevision is the Scottish partner in a high profile European Erasmus project, BridgingDigital. Working with students at UWS, digital artist Trent Kim and StudioFV, the project is supporting RWH1697 to bridge the 17th and 21st centuries with Augmented Reality.

The Renfrewshire Witch Hunt of 1697 was a pivotal event in the history of Paisley and one which, if folklore is to be believed, still has a powerful hold on the town to this day.

Bridging Digital team has been using this historical event, which involved the arrest, execution and immolation of eight innocent people on a charge of witchcraft – largely at the behest of a local landowning family – the Shaws of Bargarran – to test ways in which augmented reality, in the form of QR codes and mobile phones, can be used as an interactive resource for tutored walks.  Again, the emphasis is on disseminating information using novel technological applications whilst working with people who would, hitherto, have had little scope or experience of exploring such technologies.

Fablevision’s involvement in this Erasmus+ project features the use of digital techniques to help in the reimagining of alternative futures for the former Ayrshire fishing village of Dunure.  Working in conjunction with the University of the West of Scotland (UWS), South Ayrshire Council, Dunure Development Trust, Dunure Community Council and StudioFV, Fablevision conducted research and provided documentation to technologies developed by Trent Kim, director new media arts and his student team at UWS.

In the Dunure example, the ruined castle was used as a backdrop on which the story of the village – its history as a feudal fief of the Kennedy clan, a major fishing harbour and as an artistic community, frequented by Charles Rennie Mackintosh and Margaret McDonald – could be played out to perhaps realise the tourist potential of the area.

Back in November 2021, Fablevision commissioned StudioFV to make a video case study of the University of the West of Scotland’s (UWS) New Media Art course as part of its ErasmusPlus-funded research project, Bridging Digital, which explores how artists and communities can use digital technology.

A team of UWS students led by lecturer, Trent Kim, travelled to Dunure, South Ayrshire to work with Dunure Community Council to work on a project which uses video projection – onto the ruins of the former Kennedy clan stronghold – to tell the illustrious story of this former fishing community.  The specific aim of the community is to find novel and interesting ways that they might bring this history to life for tourists and visitors to the village and neighbourhood. 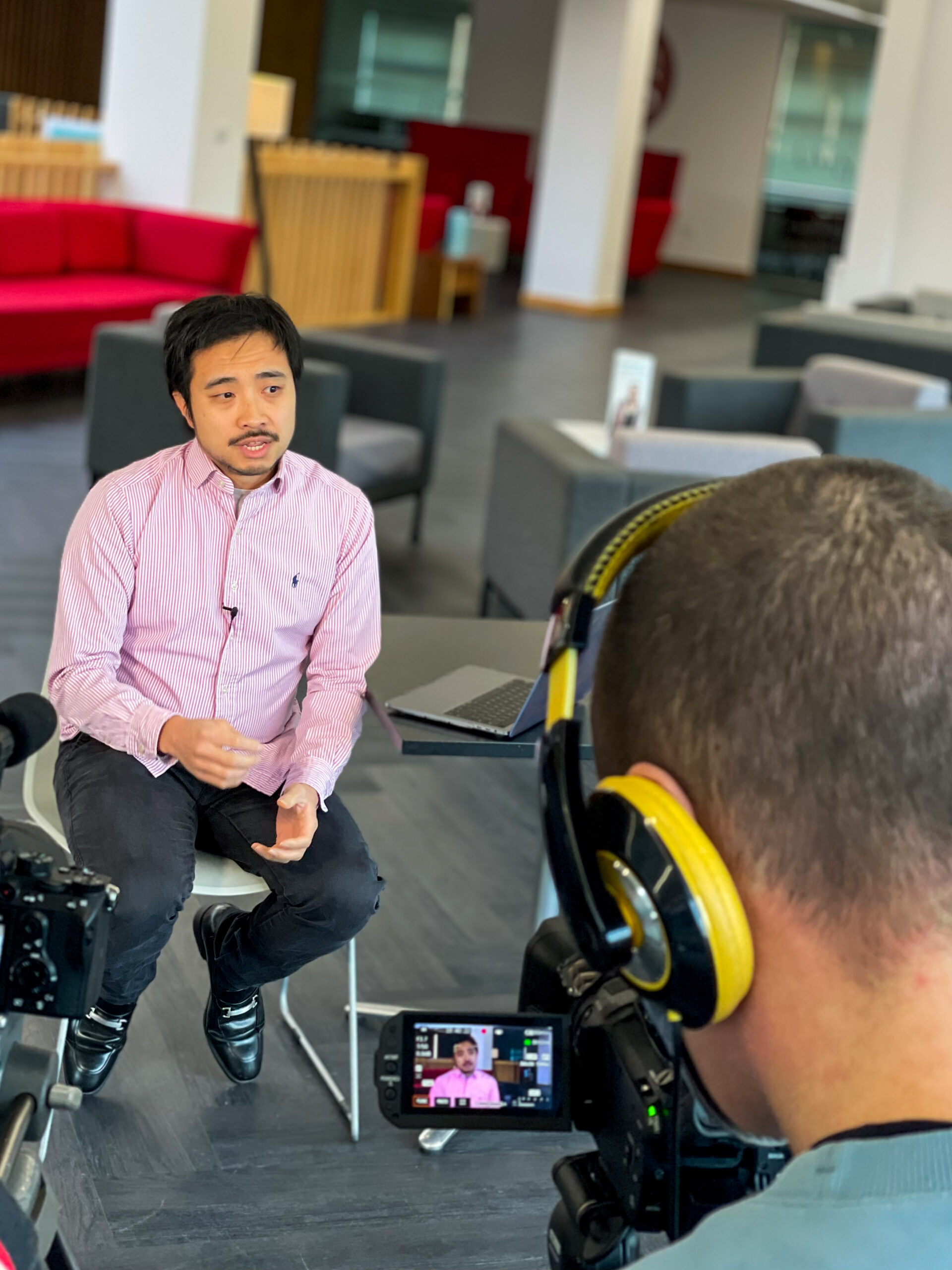 Past Perfect to Future Indicative

Fablevision’s sister organisation, StudioFV was at the University of the West of Scotland recently to film and interview, Trent Kim, the director and lecturer of the unversity’s New Media Arts department who set his students the task of using art projections as a creative stimulus, the findings of which will inform the Erasmus+-funded Bridging Digital project.

The interview was a follow up to the recent art installation at Dunure Castle in Ayrshire, where images of Dunure’s past were projected onto its walls.

The Bridging Digital project explores new ways in which art-centred activities and inputs can be used as a medium for change.  The role of art in this context is threefold: it is an instrument, metaphoric and a harbinger.  The past, the “known known”, comes together with the “known unknown” to create an as yet “unknown unknown” –  the future.

If this is far too Rumsfeldian for this early in 2022, just remember that the past is not only another country, it also the only reference point, predicate and tutor we have for imaging our future.  Unlike Marx’s apian architects, we must first build the future in our imagination. 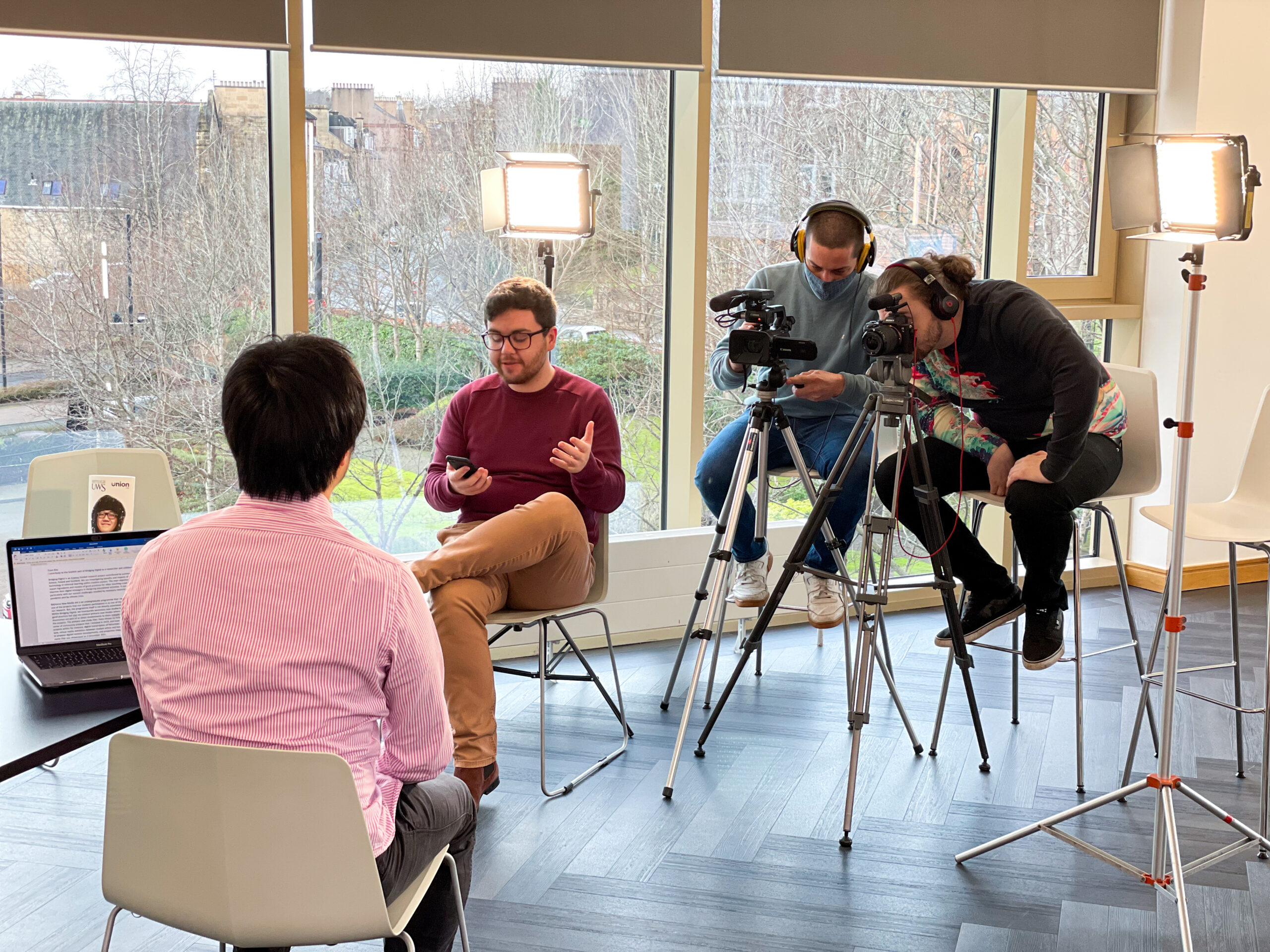 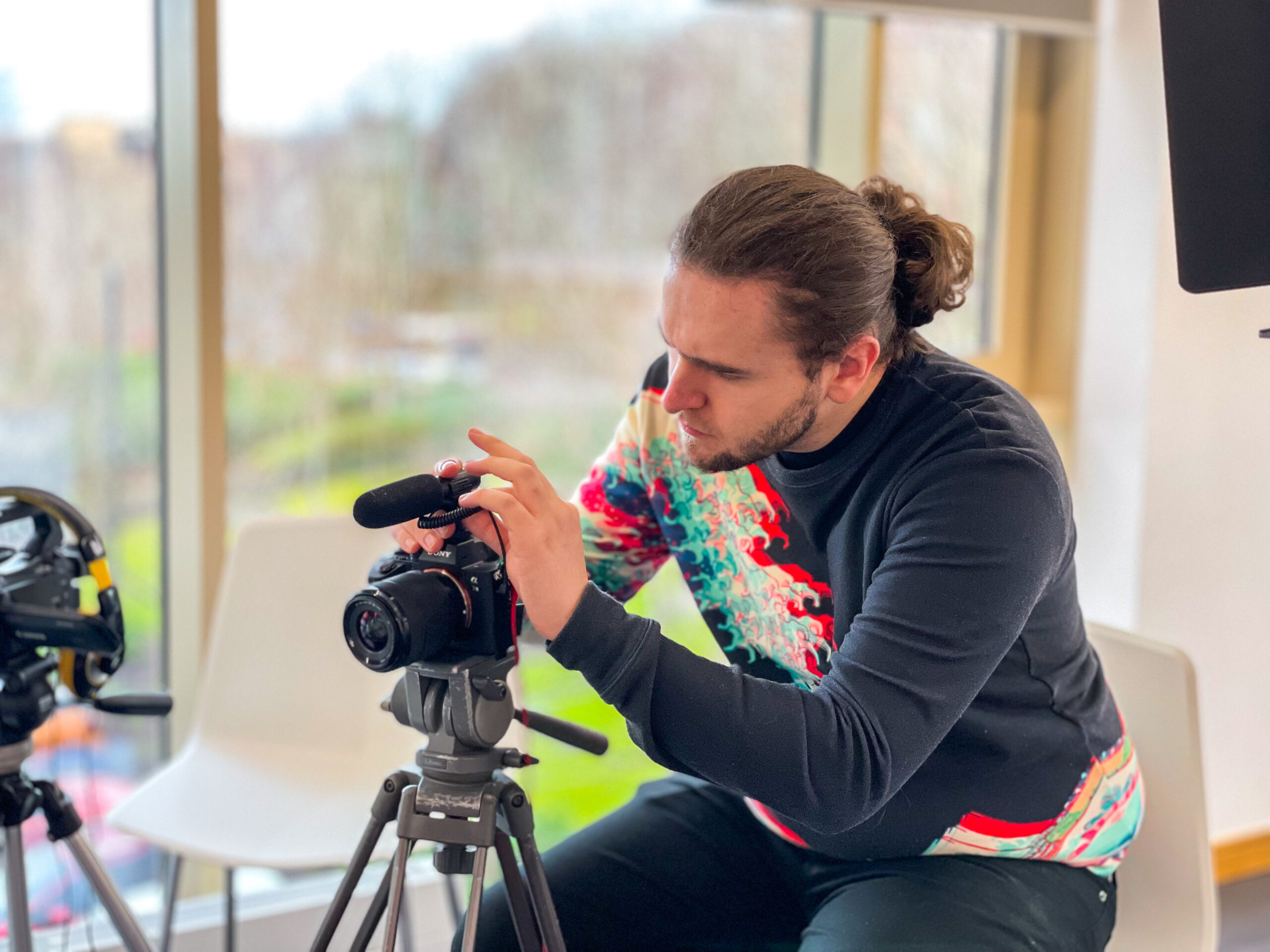 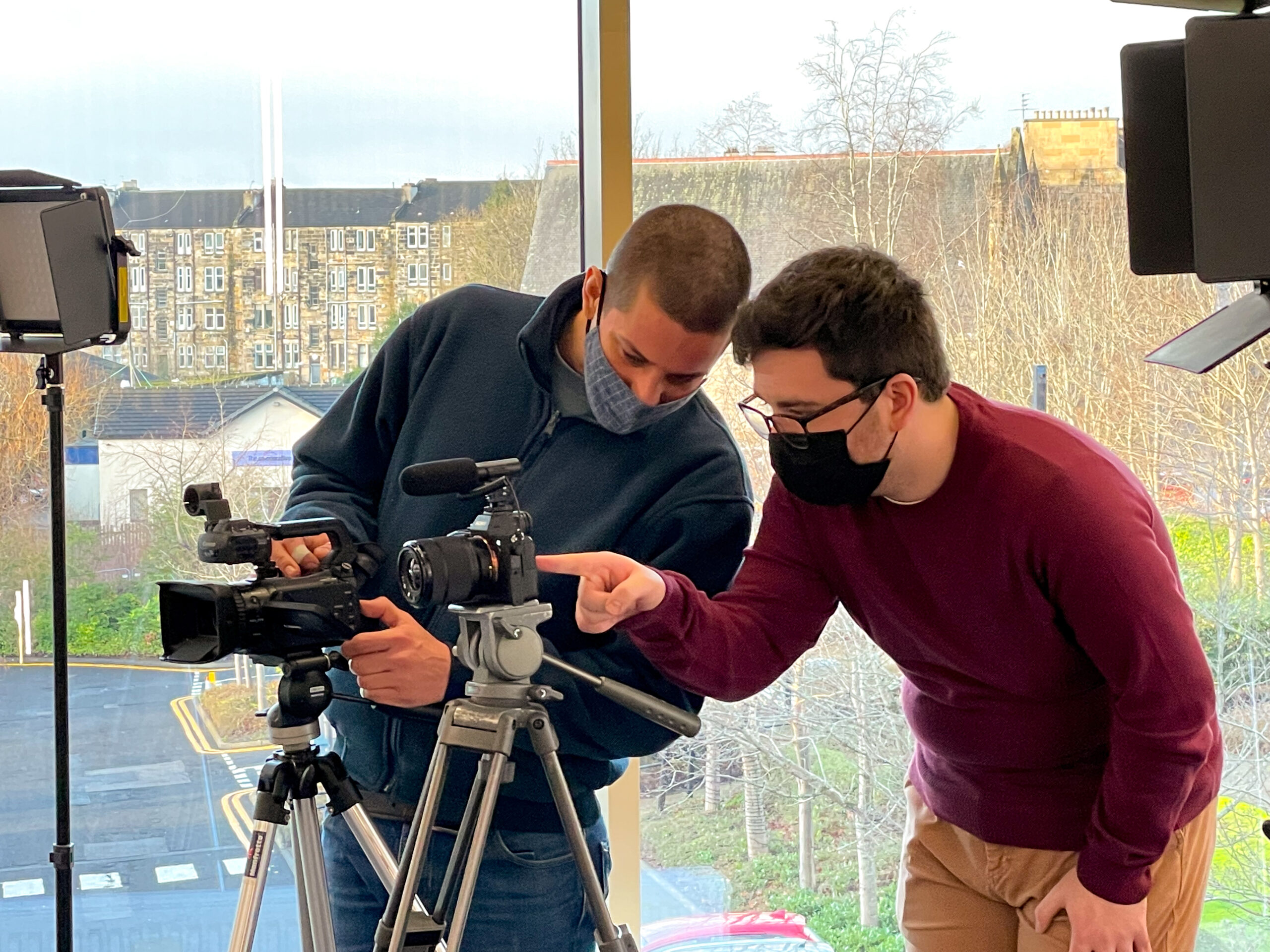 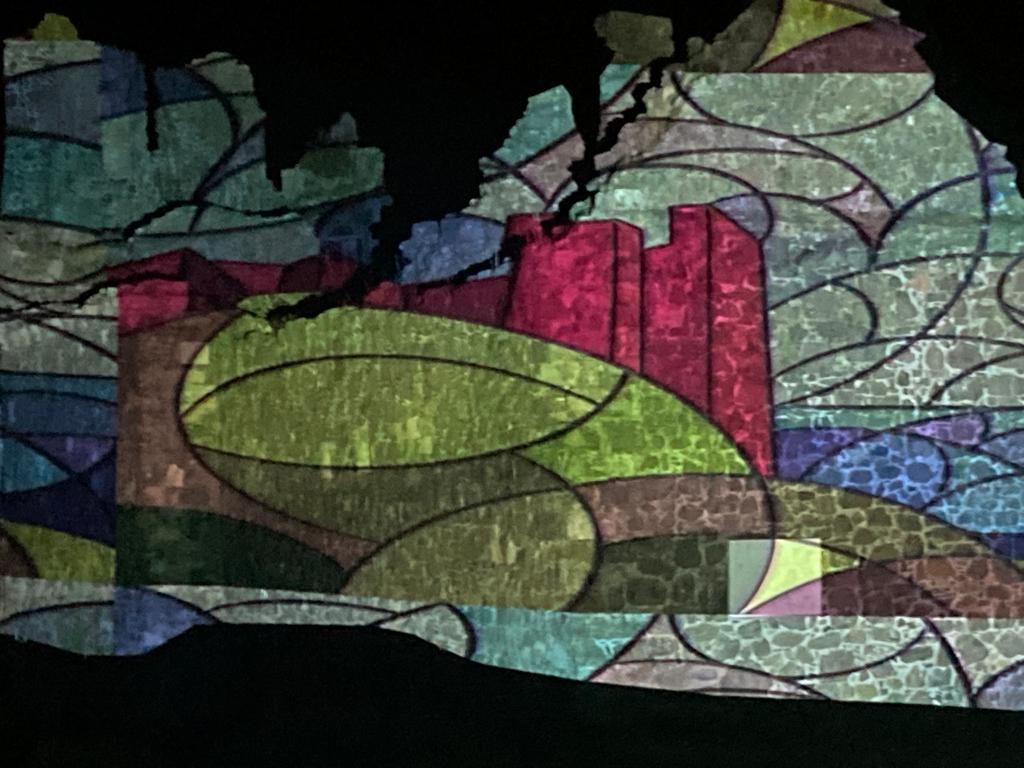 The project, headed in Scotland by Liz Gardiner, Fablevision, is collaborating with Trent Kim, director, New Media Arts, University of the West of Scotland, to explore how artist-led learning can use digital techniques as a catalyst for helping communities adapt to and author change.

In the Dunure example, StudioFV, filmed the work of UWS students in re-purposing the romantic and somewhat desolate coastal ruin of Dunure castle as a canvas on which to project the village’s long and varied history.

Home to Scotland’s oldest lighthouse, with a once thriving fishing industry; a place of sea-inspired folkloric tales; the blood feuds of the Kennedy clan; connections with Mary Queen of Scots and Charles Rennie Mackintosh and Margaret Macdonald; the village is now looking at ways in which it can incorporate all this into a new and sustainable future centred on the tourist potential of the area.

The nub of the matter is re-imaging: what do you do when you no longer do what you did? 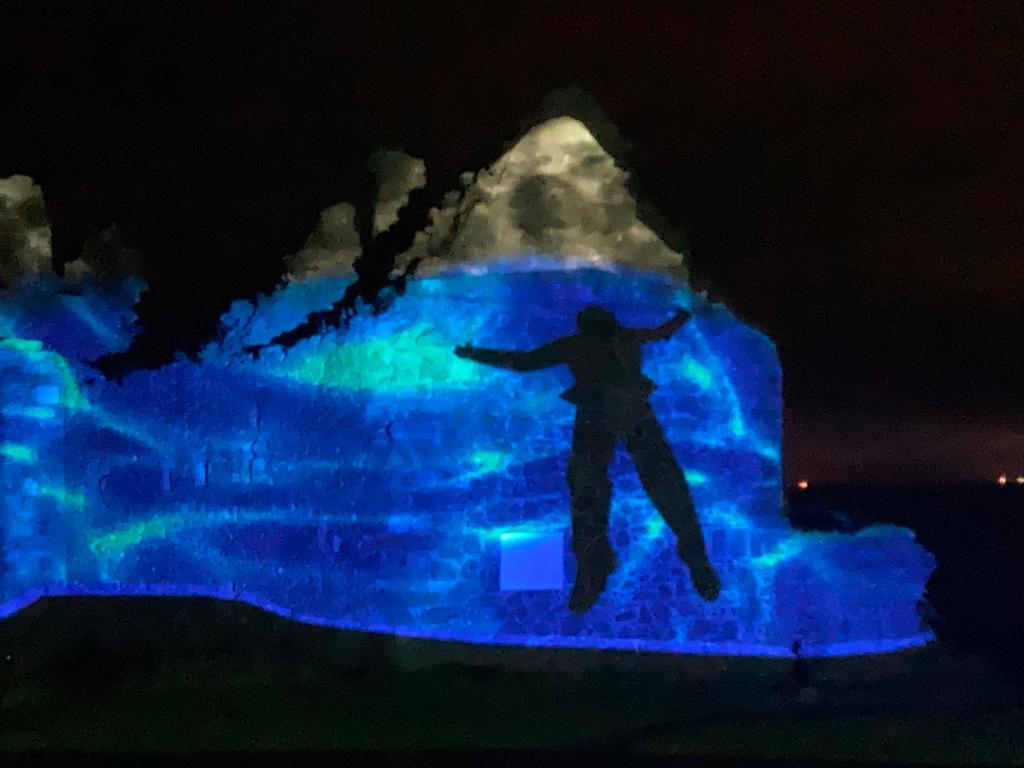 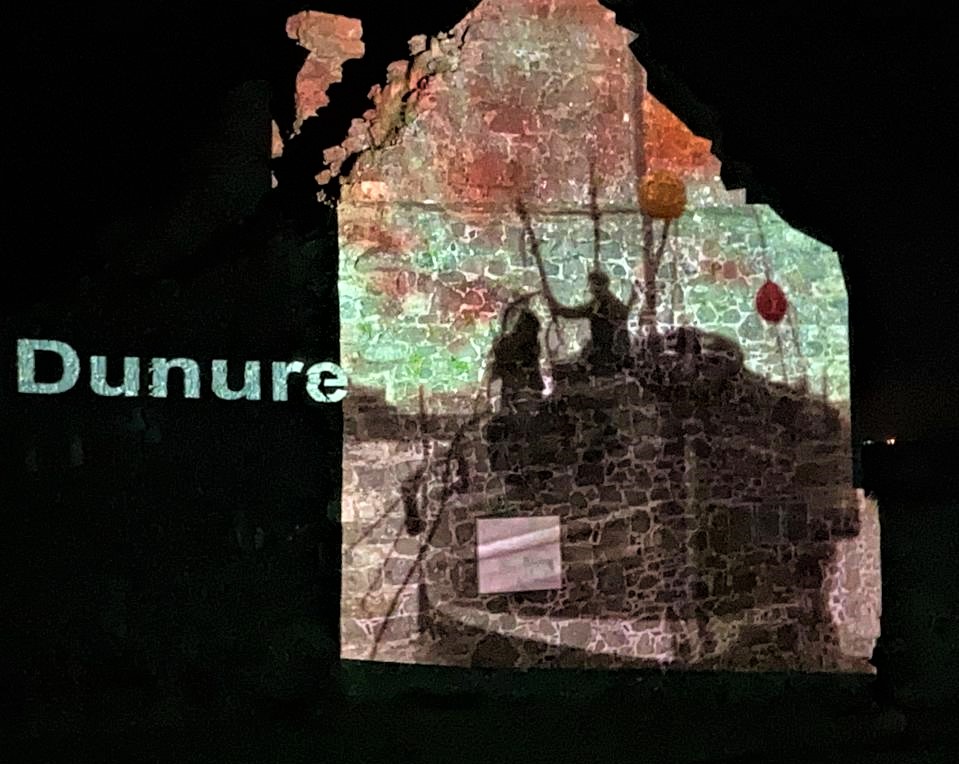 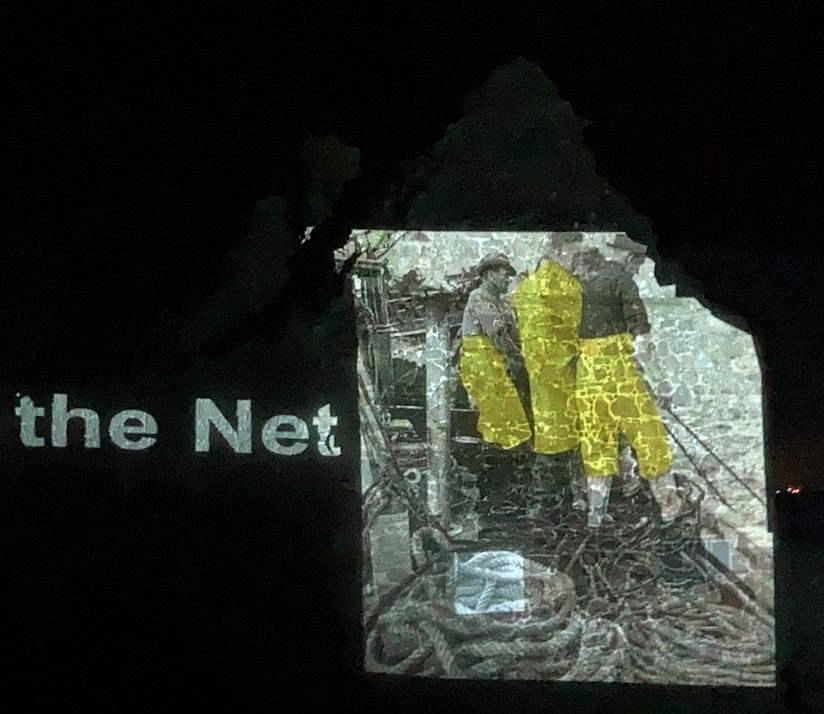 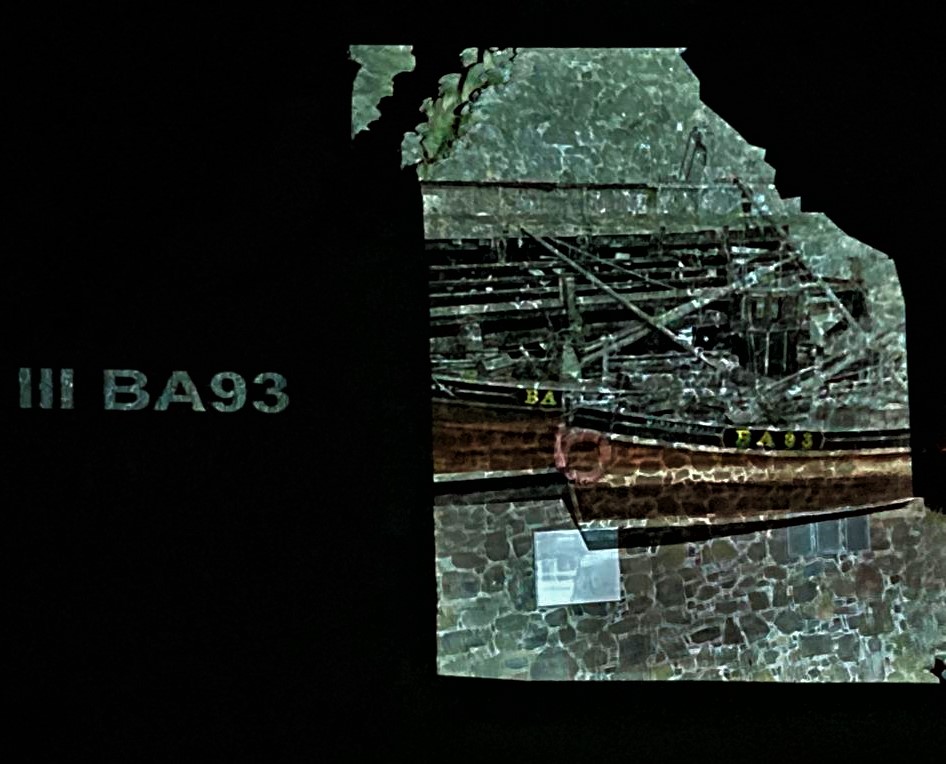